Yolande Racine, at the time executive director of the Cinémathèque québécoise, in a personal e-mail addressed to André Gaudreault on October 15, 2010.

See the website of the Society for Cinema and Media Studies. Our emphasis.

The site can be found at the following address: http://www.cmstudies.org/?page=org_history.

For more information on this topic, see the additional material online.

Among the examples that could be mentioned here are the very recent cases of the Université du Québec à Montréal, which in 2010 inaugurated a new specialization, “Cinéma et images en mouvement,” in its master’s in communication program; and that of the University of California, Santa Cruz (UCSC), which has offered, also since 2010, a “Ph.D. in Critical Practice in Film & Digital Media.” We might also mention York University in Toronto and its “Ph.D. in Cinema & Media Studies,” and Concordia University in Montreal and its “Ph.D. in Film and Moving Image Studies,” both of which were inaugurated in 2008. This is a very short list from among dozens of other similar cases (in North America at least) which share the juxtaposing of cinema with a broader field (“images en mouvement,” “Digital Media,” “Media Studies,” “Moving Image Studies”), which always includes cinema itself, moreover (cinema is also moving images, it is one of the media referred to when one speaks of digital media, etc.).

This desire to broaden the horizons of film studies programs is one of the effects that the changes brought about by the “digital tsunami” have had and continue to have on the field of film studies, as well as on the relations those who work as “film teachers and researchers” maintain with their very object of study. It seems clear, first of all, that cinema’s medium specificity, in this new context, has become more blurred than it ever has been. Since the turn of the century it has been said that the definition of cinema is changing, fluctuating, imprecise, unstable, variable, etc. Hence a certain amount of confusion on the part of most people who work in film studies concerning the boundaries of their discipline.

We could take as an initial example (and symptom) of this phenomenon the case of a research group such as ARTHEMIS (Advanced Research Team on History and Epistemology of Moving Image Study), a research infrastructure which is, according to the way it defines itself, “dedicated to the study of the evolution of film studies as a discipline,” and which has existed since 2007. One sees the apparent paradox: the research group says that it is devoted to the history of film studies as a discipline, but to define itself as a group it makes broader reference to moving image study. It is a little as if the death knell of “film studies as a discipline” had already tolled and, in order to undertake the history of the discipline in question, it would be better to act from the observation post (post mortem?) identified as something like “Moving Image Studies.”  “Something like”; indeed the research group does not identify itself directly with MIS (“Moving Image Studies”: a disciplinary field that already exists, in a fairly restrictive manner, as we shall see further on), but rather quite simply proclaims its desire to study the moving image; on the home page of the ARTHEMIS website (see figure 1), one can see that there is a step that has not been taken – that has not yet been taken.

Figure 1 – Home page of the website of ARTHEMIS (Advanced Research Team on History and Epistemology of Moving Image Study), a research group based at Concordia University in Montreal.

Once again we can see how, and this is highly emblematic for the authors of the present volume, a group which declares itself to be devoted first and foremost to the evolution of “Film Studies” has made its focal point (as seen in the title of the conference) not, precisely, “Film Studies,” but what some people might see as a rival: “Moving Image Studies.”

Are we, with these “Moving Image Studies” appearing over the horizon, witnessing the birth and constitution of a new discipline? One might think that this is the case. More than a mere rival, this new discipline may become a substitute for “Film Studies,” whose seeming study of cinema alone, in the classical sense of the term, is beginning to be seen as too restrictive. Indeed in the present-day context we might imagine that “Moving Image Studies” may in a few years cause “Film Studies” to disappear and take its place, by phagocytising and cannibalizing it. This, moreover, is what is already taking place. Take for example the “Ph.D. in Moving Image Studies” program at Georgia State University, whose name no longer makes explicit reference to cinema. 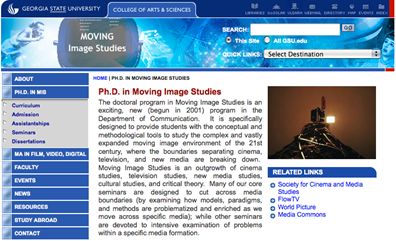 We might imagine that those in charge of creating this program did so without inhibition or remorse, taking as their justification the recent broadening of the boundaries which not long ago separated cinema, television and what is described on the program’s website (see figure 2) as the “new media”:

The doctoral program in Moving Image Studies is an exciting, new (begun in 2001) program in the Department of Communication. It is specifically designed to provide students with the conceptual and methodological tools to study the complex and vastly expanded moving image environment of the 21st century, where the boundaries separating cinema, television, and new media are breaking down. Moving Image Studies is an outgrowth of cinema studies, television studies, new media studies, cultural studies, and critical theory. Many of our core seminars are designed to cut across media boundaries (by examining how models, paradigms, and methods are problematized and enriched as we move across specific media); while other seminars are devoted to intensive examination of problems within a specific media formation (http://www2.gsu.edu/~wwwdcm/mis/4946.html).

We might also suspect that such a hasty abandonment (as early as 2001, in fact) of any reference to cinema in the Georgia State University doctoral program is not unrelated to the fact that this program is part of a communication department (and not a cinema department or cinema studies department) and that it was born by bringing together five distinct disciplines (cinema studies, television studies, new media studies, cultural studies and critical theory), among which cinema is just one element. We might hypothesize that scholars specializing in cinema studies were a minority among those in charge of designing the program. We formulate these suppositions keeping in mind the fact that the doctoral programs discussed above, even though they were conceived quite recently, were founded within film departments and by cinema specialists (this can be verified by consulting the respective websites), and that this is the reason, fully aware of what they were doing, it was decided to maintain a direct reference to cinema itself in the name of the programs being created.

See the first epigraph to Chapter 3 of the present volume.

William Uricchio, in a personal e-mail to André Gaudreault, August 4, 2012.

Would it be considered foolish to assert the following clauses?:

I think the first statement is fair, though some folks will balk (they don’t accept the mechanical as « digital » in contemporary parlance… and TV does have a long period as an analog medium from the 1940s-80s+). A formulation like, « at its start and into the 1940s, optical-mechanical television could be considered digital » would work, since the image « dissector » could indeed be argued to be based on binary visual access. Actually, the image telegraphs of the mid-19th century would also be a good (and earlier) example. The digital revolution, I’d say, is linked to computation and electrical digital systems. The mechanical digital systems go back to the 17th century (and earlier), and are especially prevalent in music recording and playback (church chimes, music boxes, pianolas and the like). But while in use, they weren’t really transformative (revolutionary) in comparison to electric and computer based systems in the post-WW2 era.